This sacred Nemeton was constructed during the winter of 2001-2002 and was first used for public ritual on February 2, 2002 for the Feast of Imbolc. 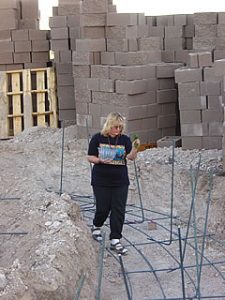 The foundations were started in November, 2001. Due to the weight of the 12 standing stones, which ranged from 3500 to 7000 pounds each, a massive, concrete foundation was required.

Finally, the day in January arrived when the large stones would be set in place. A crane was used to place the standing stones and to bring in the altar stone. As each stone went into place, everyone could feel energy building. Finally the last stone went into position and a rush of energy sent shivers down the backs of everyone present. Even the workmen felt it. 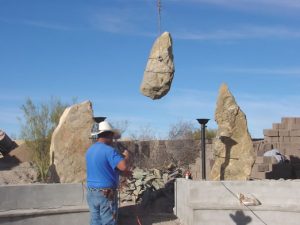 Lowering a stone into place 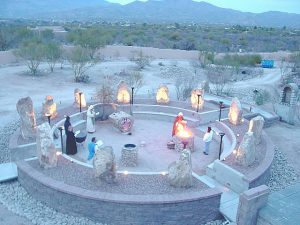 The Stone Circle was consecrated on the night before Imbolc in 2002. There were six of us present at the time: Senior Druid David Foster, Arlene Davis, Don Davis, Michele Briere, Steve Sampson and myself. I wrote a special ritual for the occasion and the date was chosen so that the Circle would be ready for our first big, public ritual for Imbolc the following evening. That ritual was even more special. As the Gates were opened, the sun came out from behind the clouds, illuminating the Rincon Mountains with a huge rainbow appearing over the Circle as birds flew clockwise around us.

The Nemeton continued to grow. A glazed, terracotta image of 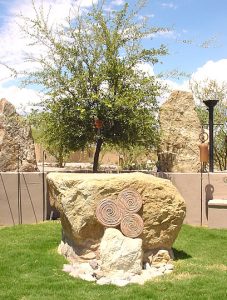 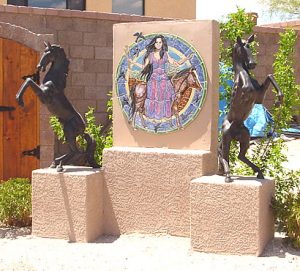 the triple spiral from Newgrange was placed in front of the Altar (left), replacing the one of Rhiannon that had originally gone there. A new altar to Rhiannon, complete with rampant bronze horses on either side (found in the UK), was built to honor my first Patron (right).

Once we began building these altar shrines, they came on quickly. As Rhiannon was my first Patron Goddess I felt the need to make Her altar more grand. The addition of the two bronze horses gave this altar a special look, and one that everyone noticed.

We honored Rhiannon and Her husband Pwyll pen Annwfn at our Beltane celebrations in early May, and we would even dance the Maypole in the center of the Circle for Them. Her altar was always a special place of offering for many of us. 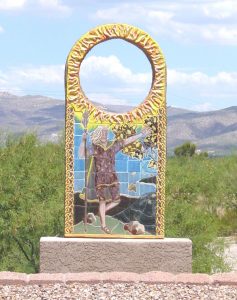 Altar to The Morrigan

The Lugh altar had a circular opening at the top and the Midsummer sunrise occured in this opening as seen from the center of the Henge. Altars to the Ancestors (in the shape of a Barrow) and to the Nature Spirits were also built. Lugh Lamphada is the King of the Gods. He was made so just before the 2nd Battle of Moytura where the Gods faced their enemy, the Fomoire, a sea people who also wanted to live in Ireland. Lugh led the army of the Gods to victory, killing the evil Balor of the Evil Eye, and routing the enemy.

The altar to Lugh was built in such a position that the sunrise, as seen from the center of the Circle, would appear in the center opening on the Summer Solstice. The Grove (congregation) would spend the night sleeping in the circle and then would get up for a short ritual honoring Lugh and the sun at sunrise. This was a very popular activity at the time.

Because of the slope of the land the Circle was built on, the altars had to be built to different heights above the ground in order to all appear at the same height at the center of the Circle. As a result, the Lugh altar was really quite high, and a step had to be build to allow people to offer incense to the image. The Morrigan icon, on the other hand, was right at eye level.

The altar to The Morrigan was on the retaining wall to the south of the Circle. She has always been a very popular goddess, even though She’s the goddess of war, death, and destruction. She does rule over change, and therefore could be considered a goddess of transformation. This is a modern, and not ancient idea, but it does make sense. 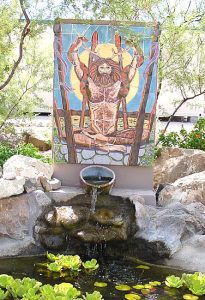 Shrines to Cernunnos (left) and Brigit (right) were built, with glazed images of the God and Goddess. Cernunnos’ altar had a small pool and fountain in front of it, symbolizing the cauldrons of the Otherworlds. The altar to Cernunnos sat to the west of the Circle (the direction in the lore of the Otherworlds and Lands of the Dead). He is a god of liminality and the Otherworlds, of the forest and its creatures, and of commerce (the depiction of the God found on the Nautes Altar under the High Altar of Notre Dame in Paris was built by river merchants sometime during the Roman era).

The Goddess Brigit rules over Fire (She tends it) and is the Goddess of poetry and inspiration, of shaping through the forge, and also of healing. In early Medieval Ireland her sanctuary in Kildare, built on top of the ancient Pagan one, had a round fire that was tended by the nuns continually for centuries, until extinguished by the Prostestants. There are now a couple of eternal flames burning in Kildare, Ireland once again. 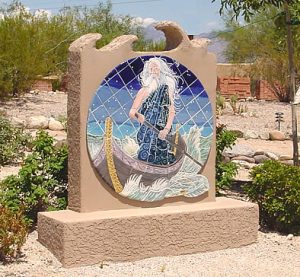 The altar to Manannan mc Lir (Mananan, son of Sea) was built with a bit of whimsey on the top (right). The mason managed to shape the concrete to look like the waves of the sea, and it was something we were quite proud of.

The altar to Taranis, god of thunder and storms (left), is why all these altars got built in the first place. At our first public ritual in the new Stone Circle, for Imbolc in early February, we feared that it might rain. At the rehearsal earlier in the day the clouds hung low in the sky and we even had some drops of rain. This is very unusual in Tucson, AZ, and we feared that if the weather didn’t hold that no one would come to our ritual in our new venue. Up until this time we had averaged 7 or 8 attendees, and we wanted to do better than that.

So after the rehearsal I went down into the Circle, alone, and offered whiskey to Taranis through the Fire. I said, “Taranis, Lord, if You will give us good weather this evening for our ritual, I’ll…..I’ll….build You an altar!” It was all I could think of in the moment, and I knew that the ancients did such Votive Offerings, so I was hopeful.

The weather held off, and that evening 25 people showed up! And during the ritual, just as we opened the Gates to the Otherworlds, the sun slipped out from behind the clouds, the mountains in the east all lit up, rainbows appeared, and birds began flying around the Circle in a clockwise fashion. Well, He got me. I built that altar in a few months time, commissioning a local swimming pool tile artist to create the icon. And she made all the others there as well. 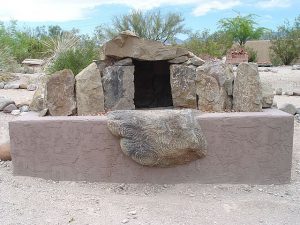 Shrine to the Ancestors 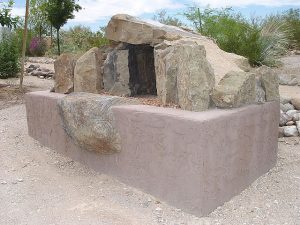 Shrine to the Ancestors

The altar for our Ancestors was one of our most ambitious ones. We wanted to make it look like a small version of a real burial mound, such as you might see in Europe, with an entrance, curb stones, and a dirt mound. We built the inside first and then added in the stones on the foundation.

Later, a moulded rock bearing the Newgrange Spiral was added just below the tomb’s ‘entrance’. Offerings could be made through that entrance where there would fall into a pit beneath the shrine.

So we had altars to Gods and Goddesses and a shrine to the Ancestors. That just left the Nature Spirits, the Spirits of the Land. We built this one with three icons on it. 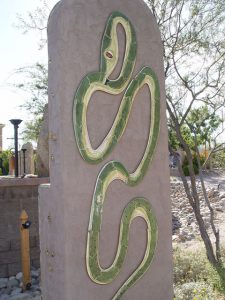 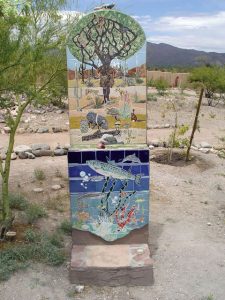 Altar to the Nature Spirits

At the top was an icon of Spirits of land, such as trees, bears, and even a Land Goddess. On the bottom were creatures of the sea. And on the back side there was a large snake, which is one of the symbols we in ADF use for the Land Spirits and the Midworld (where we live).

Due to the slope of the land the Circle sat on, we had to build a step at the base of the Nature Spirits altar so people could reach the top icon, just as we had done for the Lugh altar.

All the altars we build had a ledge at the base of the icon (and at the base of the upper icon for the Nature Spirits) so that offerings could be left there. And they were also handy places for incense burners. At every High Holiday rite we would offer incense to the Spirits we called upon, and for the Ancestors and Nature Spirits that meant we offered it at every ritual. The ADF ritual order requires that group offerings be made to each of the three categories of Spirit – Ancestors, Nature Spirits, and the Gods and Goddesses. 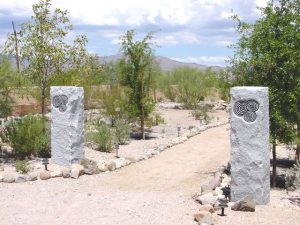 There was also an altar with an image of the Druid Sigil above it. This altar was used for all those Deities of other Spirits Who didn’t have Their own altars. And there were also four altars along a wall without images above them. These were for future expansion (though never used). The Nemeton was also turfed over in the center, and sleeves for holding Druid staves, as well as one for a Maypole in the center of the circle, were constructed. 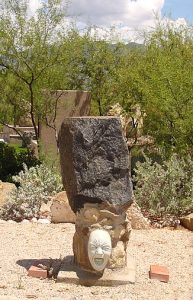 There was a Procession Way from the main house which came to the entrance of the circle. At the entrance to the Sacred Precinct, two granite pillars stood marking the place. These were a gift from Kozen Sampson and were very beautiful. They depict the Newgrange Spiral, one of Rev. Kirk’s favorite symbols.

At the top of the hill was the altar to the Outdwellers. These Spirits are those who are not aligned with what we are doing. In some Groves (congregations) they are seen as those beings to warred against the Gods (such as the Fomoire in Ireland or the Titans in Greece). We also look deep within ourselves to find the Outdwellers Within, those feeling of anger and fear,

Entrance to Circle from Procession Way

that we may release them before the ritual. And we appease Them by giving Them a gift. During ritual, ale is poured on the black, basalt stone which makes up the bulk of the altar. This stone was found on the side of a dirt road in northern Arizona. This altar stood just before, and to the right, of the two granite pillars marking the entrance to the Sacred Precinct.

Further down the Procession Way was the entrance to the Henge proper. This entrance was flanked by two large stones. There was a boundary ditch dug all around the Circle, making this a true henge. A small arroyo drained down to the Circle and around it during the rainy season. There were three bridges crossing this ditch on the east, south and west sides of the Circle. The world tree (a Southern Live Oak) was been planted on the north side inside the Circle.

This plan shows the locations of the stones. North is to the top. The Circle is aligned with Equinox East, based on sightings of the sunrise on both the Autumnal Equinox of 2001 and the Spring Equinox of 2002. The nearby house is aligned on magnetic east, and there is quite a variation.

Each stone on this plan is numbered. Before the Circle was built, owners Kozen and I went on a trip to Ireland, England, Cornwall and Wales to collect small stones from Neolithic and other sacred, mythic, and historic sites for this Circle. When the stones, altars, Well and Fire were built, a small stone from these special places was put in each hole or foundation. The numbers on the plan correspond to the following list of the origins of the small stones: